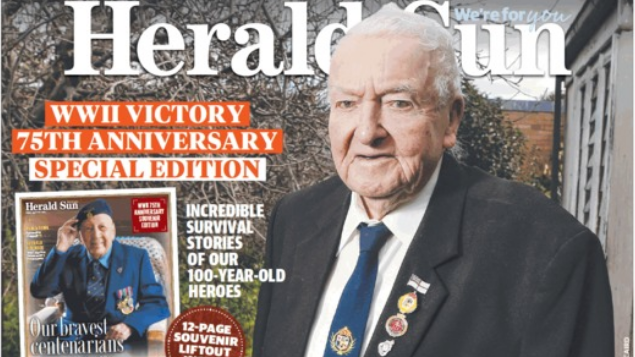 Prestige client, Norman Tame, has vivid memories of the day he and his crew found out that the Allies had been victorious in the Pacific, and World War II was over. Norman’s extraordinary story was featured recently on the cover of the Herald Sun in a WWII Victory 75th Anniversary Special Edition.

The Infamous Battle of the Coral Sea

Throughout his five years at sea, Norman experienced some close calls. The closest occurred in May 1942, whilst Mr Tame was serving on the HMAS Australia during the Battle of the Coral Sea. Remarkably, when the Japanese and the Americans attacked, neither squadron “registered a direct hit,” flying in diamond formation.

The 96 year-old veteran recalls “we had a torpedo bomber attack, immediately followed by a bombing raid by 19 high-level bombers.”

A Commitment to Remembrance Despite the Pandemic

Reflecting on the end of the war, Norman said “We knew it was going to be a new life but we didn’t have much to celebrate with at the time.” On August 15, 1945 when the news came through, Mr Tame was stationed at Balikpapan, in Borneo as a “beach commando.” He had spent five years at sea, having joined he Australian Navy at 16.

This year due to COVID-19 restrictions, Norman will be observing the 75th anniversary of Victory in the Pacific Day in isolation.

Prestige case manager, Jayne, and Norman’s care team love hearing Norman’s extraordinary stories. This year, the 75th Anniversary of the end of World War II will not be marked with a service at the Melbourne Shrine of Remembrance.

However, the occasion will still be honoured by Norman and his brave digger mates, united by the ANZAC Spirit, and all of us at Prestige as we salute a true hero and inspiring member of our community.